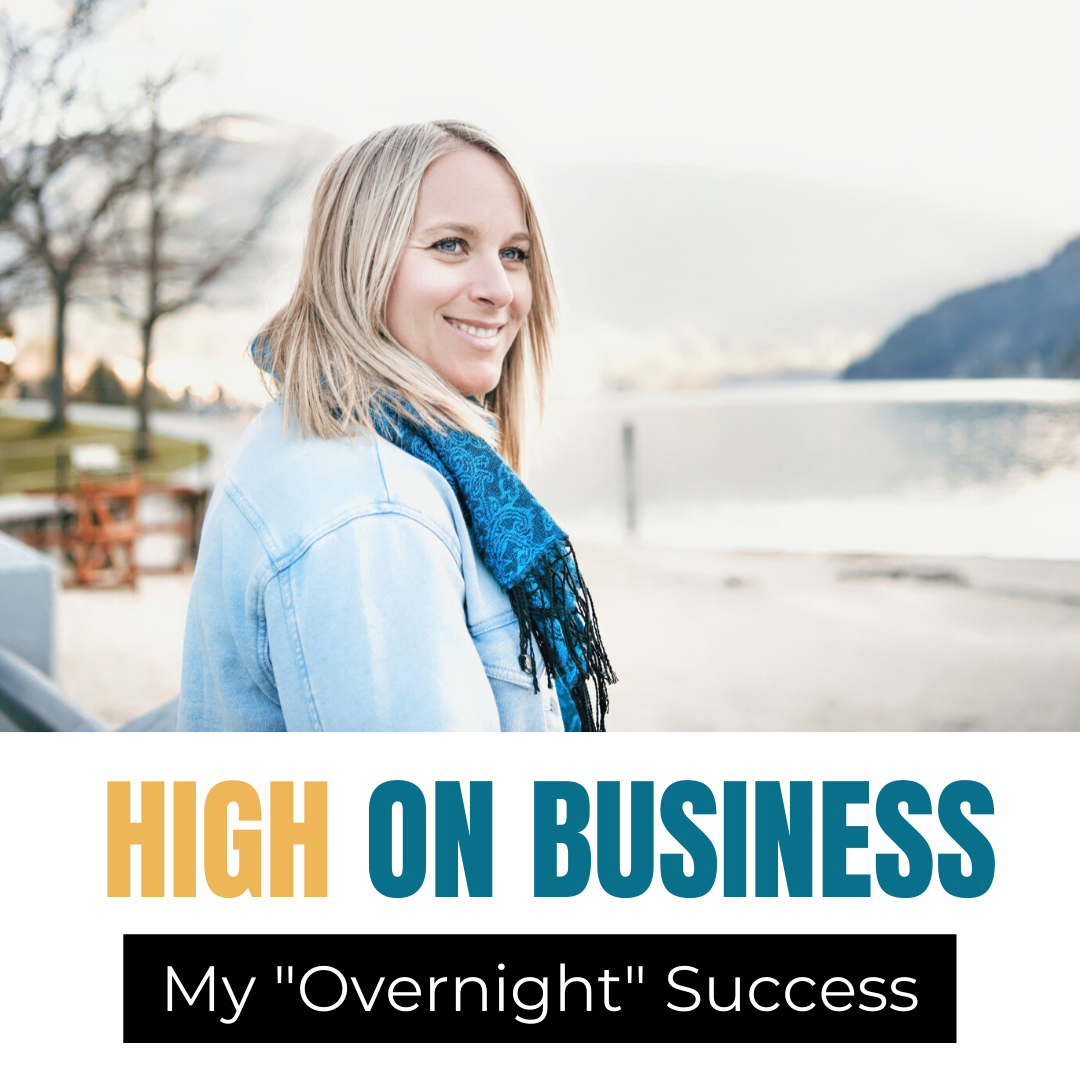 The Story of my “Overnight Success” Building a 6-Figure Business

I really want to share my story with you - how I went from depressed, anxious, struggling to make money, doing really interesting jobs like planting trees and fighting fires to having a multiple six figure coaching business that teaches health coaches and other wellness entrepreneurs how to build their business. But we have to go back to the beginning.

I grew up in a town called Dunn Robin in Ontario, Canada and we were right on the Ottawa river. Because of its size, it felt more like a lake and all my neighbors had cottages there, but I was one of the few houses of people who lived there year round. When I was about 10, me and my best friend used to dive to the bottom of the Ottawa river to get this clay that we would boil with essential oils and sell door to door as face masks. So I guess you could say I always had an entrepreneurial mind. I wasn't just an entrepreneur at 10 years old though - I was a multi-streamed entrepreneur. We would always have these little garage sales, lemonade stands and we'd always be selling all our toys. We were always hustling and trying to make money.

I was a big timer skiier from the age of 12 to 19 and  I was the first Canadian to ever place in a half-pipe con competition in Canada when I was 19. But I had this dream of moving West to be in the mountains and ski. But after competing for six years in high school and being pushed super hard by my parents and my coaches, I was burnt out from skiing. So once I graduated high school, I decided I wanted to be a city girl and moved out West to the prairies for university.

I moved into first year residence and started my major in kinesiology. Let's just say I had a lot of fun in university, but I was lost, like most of us were in our 20's. I was partying a lot but I still graduated with honors. About two years after living in the city, I really started to realize that I really missed the outdoors. So I decided to get a job as a tree planter and travel in the in between time, but I still had the itch to be in
a ski town.

After a trip to South America, I moved to Nelson, an amazing paradise in British Columbia which is where I still live today. It's full of amazing restaurants where all the food is organic, gluten free and paleo. I spent that winter skiing and ski touring and ended up being a forest firefighter during the off season.

In March of 2011 I decided to jump off this cliff just two days before the end of my season, right before I was set to go on another trip. I landed funny and I blew my knee out. It was super painful. But I ended up going to Thailand two days later. My friend who I went with literally carried me all around Thailand.

Throughout that summer, I worked really hard to rehab my knee. But unfortunately when I went back to skiing that following winter, as soon as I got on skis, I could tell something was off. I ended up getting surgery in February of 2012 and this is one of the most defining moments of my life. I was lying there all fucked up on drugs on the operating table. The surgeon goes into my knee and he said "your meniscus is fine but your ACL is in shreds and you're going to need ACL reconstructive surgery." I felt like my life was over because the ACL basically holds your knee together. And as a skier, that is really important.

I felt like my life was over. It was a really lonely time. I realized that at time all I have is skiing and the outdoors.

The surgery was a big trigger for my health issues that ensued after that. I went through a horrible period of insomnia and fatigue. And to be honest, my health has really never been the same since. I went through this incredibly hard two years where I was exhausted and sick and I was also rehabbing my knee. I had started doing a distance diploma in holistic nutrition, which I wasn't finding super valuable. But one day when I was listening to  The Underground Wellness podcast with Reed Davis, the founder of Functional Diagnostic Nutrition, and Sean Croxton. They were talking about FDN and I was like, Oh my God, that is so cool.

That's what I wanted to do. So I enrolled in the FDN course and I started doing that. I graduated in 2014 and I was really committed to following all the FDN protocols for my own health and I saw a lot of improvement. I thought I'm going to be a health coach and I'm going to build a business. But it was scary because I was still working forestry.

I got laid off from forestry in December of 2014 and in 2015 I was on EI. I was trying to figure out how to make my own income and that I just didn't know how to do. Luckily in March of 2015, the FDN team reached out to me personally and asked me to apply for a mentor position.

I thought, if I can get this part time position, this is going to pay me just as much as I was making full time in forestry and I can build my business on this on the side. So I made that decision. I built my health coaching business for those first three years while working part time for Functional Diagnostic Nutrition.

I eventually became a Clinical Advisor for hair tissue mineral analysis testing. And at one point, I became the Director of the postgraduate membership, the association for functional nutrition professionals. And from that I learned how to grow and engage a community. That's where I started to learn a lot of my marketing skills to try to help them build that membership. And at the same time I was working my ass off to get clients on the side.

Even when it felt uncomfortable, even when I was terrified, even when I felt like I had no idea what I was doing, I just kept doing it. I launched a course four times where I lost money. I launched a program that didn't really get any signups. I did a lot of things that didn't work, and it totally sucked, but I just kept on going because this was the only option for me. So I ended up building that business to six figures and I did this while simultaneously working part time for FDN.

I'm telling you this is because if you still have a side hustle, if you're still working another job to help you pay the bills, like you can still build your business part time. It is totally possible because I did it. You just need to be really intentional with how you utilize your time and you probably need a coach. Once I hired a coach, it really helped me actually no what I needed to be focusing on.

I just got so obsessed with the business side of things and what I sort of realized was that I am way more passionate about business and marketing than I am about health and working with clients. I felt out of alignment. I just knew that something was off and I realized that I really just wanted to start talking about business and I noticed something incredibly glaring when I was working as a health coach in the FDN community and some of the other health coaching communities I was a part of.

We need health coaching, we need functional health practitioners. And if they can't build their business, if they can't make money or get in front of their ideal clients, then those people aren't going to get helped and they're going to continue to be sick. So it really became my mission to end health coach poverty. In 2019, I started focusing on business and marketing. Within a year I continued to grow and I stayed steady at that multiple six figures.

I hope with sharing my story that you know building a business is not something you can do in 90 days. It's something that really builds over a lifetime and it takes time to build it. I am now in my sixth year of business. So it wasn't an overnight success.